“OCD has no specific cause. There is no known OCD gene, it is not associated with any abnormalities in the formation of the brain, and there are no specific features of background or personality that predict who gets it.” (Purdon 1)

Gabe. Gabe. You’re gonna be okay. You can do this.

My foundational memory of my OCD revolves around a pinecone. I was walking home from my best friend’s house. I must have been eight or nine. Only a few paces from his driveway there was a large, sappy spruce tree. Underneath it lay a few pinecones. One had rolled out into the sidewalk. I turned to pick it up and placed it neatly under the cool shade of the big tree. I resumed walking and made it only a pace or two before That wasn’t right. I walked back and moved the pinecone to its original resting place. I shouldn’t have moved it. No. That’s still not right. I moved it again. And again. Gabe, you’re doing this all wrong. Don’t you know what will happen if you don’t get this right? I kept picking up and moving the pinecone, sometimes starting to walk away with feigned conviction only to halt and be brought back again and again until it finally felt just “right.” I had no idea what to call this intrinsic impulse, so I called it “a guilty conscience.”

A few years ago, I bought a book called Overcoming Obsessive Thoughts. On the first page, there’s a review that reads: “Whether you have disturbing religious thoughts that you can’t get rid of, irrational, unwanted, aggressive or sexual impulses, or other sorts of upsetting thoughts, this is the book for you!”

There is, of course, comfort in the diagnosis. There is comfort in having a word for what afflicts you and stories that can shine a light on the ones you’ve hidden. However, as I page through this book, the light it sheds burns. It illuminates pain and confusion and guilt and makes me mourn a younger self that didn’t know better.

“Obsessive-compulsive disorder (OCD) afflicts about 1 to 2 percent of the population, although many people may suffer from obsessions and compulsions that occur not quite frequently enough for them to be given that actual diagnosis.” (1)

I don’t get personally offended when people causally use the phrase “so OCD”—“I always need to keep my highlighters perfectly organized. I’m, like, so OCD!” But I’d be lying if I said it didn’t bother me. It bothers me because when people mention being “so OCD,” they’re usually describing résumé skills—“seeking a job in which precision, thoroughness, and attention to detail will add value.” They are describing skills that make them high functioning. But for me, OCD inhibits my functioning. No employer is looking for someone who will stop randomly in the hallway and inexplicably take a few steps back or become so overwhelmed by the detail needed in each hand-out that he’s often finishing them in a flurry minutes before they’re needed.

I’ve heard before that if your compulsions are consuming over an hour of your day, you need to seek help. I don’t think my OCD has ever reached that severity, but I sometimes wonder about the temporal total of all the moments I’ve lost to backtracking and re-reading and shifting pinecones. I wonder if there’s a constant exhaustion that OCD perpetuates and what I could accomplish if I could skip through life unburdened by these sudden rituals.

No. I don’t believe that. I would never want that to happen.

“Obsessions have many different themes. This book focuses on obsessions that are known as repugnant obsessions. ‘Repugnant’ means disgusting. The kinds of obsessions we are addressing in this book are obsessions that have a violent or harmful theme, a sexual theme, or a religious theme.” (15)

It’s always nice to learn that the thing you’re wrestling with is literally titled “repugnant.” It’s like hearing, “Oh, don’t worry! That’s just a little patch of ‘hideous’ eczema. ‘Hideous’ means disgusting. We have a cream for that!”

People’s image of OCD is often the compulsive part—the hand-washing, the step-counting, the receipt-organizing—which makes sense because that’s what they see. However, the name starts with “obsessive” because that’s where the disorder starts, too.

Obsessions are hideous thoughts that burst into one’s mind uninvited and tend to group up into themes. Everyone has uncharacteristic and shameful thoughts. It’s human nature. But for someone with OCD, the obsession becomes that these thoughts aren’t uncharacteristic at all but rather reflect upon his character in real and disturbing ways: “Maybe I really do want to hurt him.” “Maybe I am perverted.” “Maybe I don’t believe in God.”

One reason I don’t like people knowing I have OCD is because I don’t want them wondering what repugnant thought is trundling through my mind every time I engage in a compulsion. “Oh, my dear friend Gabe just took a step backward. He’s probably visualizing taking a pick axe to my head!” (P.S. That’s not an obsession of mine. Don’t worry.)

I actually prefer not to discuss my obsessions partially because I subscribe to the belief that they have absolutely no bearing on my character but mostly because they’re embarrassing. I’d much rather talk about my compulsions. They’re silly, but at least they’re not repugnant.

Gabe, stop. No. I want her to be happy. Lord, please let her be happy.

“When people have obsessions, they typically feel discomfort, anxiety, disgust, or a sense of feeling ‘not just right.’ When people have obsessions, they try to get rid of them in some way and/or reduce the unpleasant feelings by performing some kind of act. When the act is repeated exactly the same way every time, it is called a compulsion.” (25)

I have had a lot of compulsions. For a while in ninth grade, almost every time I walked through a double door, I needed to double back and walk through the other one instead. Later in high school, I went through a period where I would repeat things that I said backwards under my breath. Thearb ym rednu. Other compulsions morph over time but follow similar templates: repeatedly moving objects (à la pinecone), re-doing or re-checking things, physical ticks. There are people with highly specific rituals that arise is only certain situations, but my OCD tends to weave itself in small ways through the whole tapestry of my daily living.

Compulsions can be exhausting. One of my saddest childhood memories is lying in bed every night staring at the green segments of my digital clock, gripped by the dread that every passing minute was one I could never get back and that not to recognize its passing would be an unforgiveable crime. And so I lay, facing the clock, observing the minutes, sometimes until I cried myself to sleep.

Gabe, stop. You cannot control that. Just keep going. It does not depend on you.

“Another faulty belief in scrupulosity that is related to moral thought-action fusion is the assumption that you should strive for a perfect moral state. This is expressed in phrases like ‘trying to always please God,’ ‘trying to never make a wrong decision,’ or ‘trying to commit no sin.’” (100)

In seventh grade, my Bible class read portions of the church book club hit of 2002, The Purpose Driven Life. In class, we talked a lot about listening to God and discerning his calls to us. For OCD me, this message became twisted to mean that every choice I made bore a moral imperative: the clothes I wore, the route I took to school, the pencil I used. And when every choice became one between right and wrong, everything also became a sign of God’s will: the song that came on the radio, a teacher’s comment, the number on the back of a jersey. I can distinctly remember standing at an intersection for upwards of ten minutes, convinced that only one way could be “right” and too petrified to make the choice.

I’m a smart person, and the ridiculousness of my OCD often frustrates me. However, I grew to defend my compulsions with an impassioned belief in both God’s voice and the domino effect. By “domino effect,” I’m referring to the concept periodically revived by books and movies that if someone had left the dance studio just a minute later or had chosen to eat at any other restaurant she never would have been hit by that car or never would have met the love of her life. In this way, my OCD began to take hostage all the things I loved most.

I felt tugs that I interpreted as divine telling me that if I just took a few steps back, I would begin an imperceptible chain reaction that would secure me a fantastic race or that if I didn’t get out of bed, walk upstairs, and move the pad of paper in the junk drawer, my aunt would die. (I did it, by the way, and she has still never thanked me!) Every decision became an act of faith and a choice between life or death.

“[Inflated responsibility] refers to the belief that if you have any influence over a negative outcome whatsoever, then you are responsible for doing whatever you can to prevent that outcome, and indeed are honor bound to do so, no matter how minute the probability of that negative outcome is.” (39)

Ok. Just do it once and then move on. It’s all right.

I still indulge these rabbit-hole thoughts sometimes. (I know my aunt probably won’t die, but I should do it just in case.) But in the past few years as I’ve become more aware of my OCD and more capable of overriding it, I’ve been left deeply skeptical of “hearing God’s voice” and severely suspicious of those that claim to act upon it.

My OCD has certainly improved over the past few years as I’ve become more aware of how it works and more open to discussing my problems with those close to me. I read on a shampoo bottle once that the person we talk to most is ourselves, and I know that it’s true for me. I coach myself through every day, reminding myself that my thoughts don’t define me and that my OCD doesn’t control me.

Another reason I hate people knowing about my OCD is that I’ve just gotten to the point that, although some obsessions and compulsions persist, the acronym itself doesn’t cross my mind on a daily basis. I hate thinking that every time I flex my arm T-Rex-style or walk like I’m mid-Cha-Cha Slide that the acronym is popping up in someone else’s. I’d rather just have my quirks.

Sometimes, though, I wonder where my personality ends and my OCD begins. Or if they’re distinct at all. Would I still be a perfectionist without my OCD? Would I write with precision? Would I take more risks? Would I be so afraid of change? 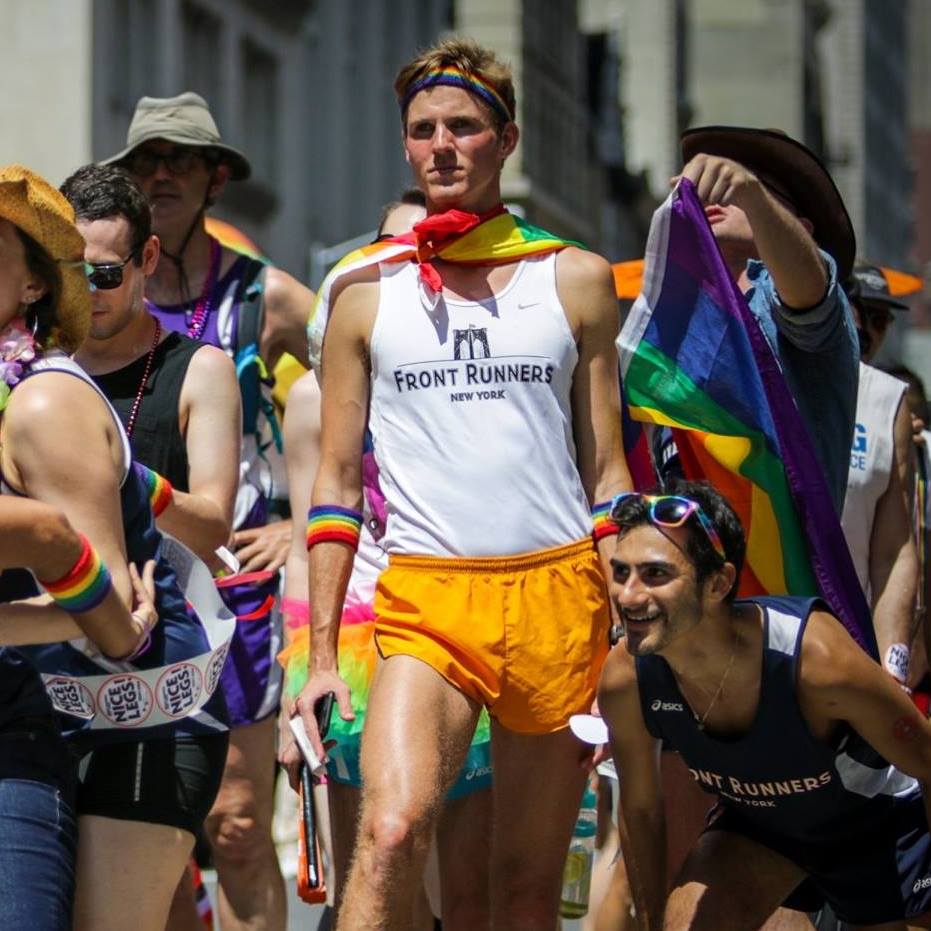 Gabe Gunnink (’14) lives in Seattle, where he works for a European travel company and gawks at the landscapes and skylines surrounding him. In his free time, he enjoys practicing Portuguese under his breath on city buses, running far enough to justify eating an entire pan of cinnamon rolls, and faithfully implementing Oxford commas.

A Dramatic Reading of a Real Break Up Letter