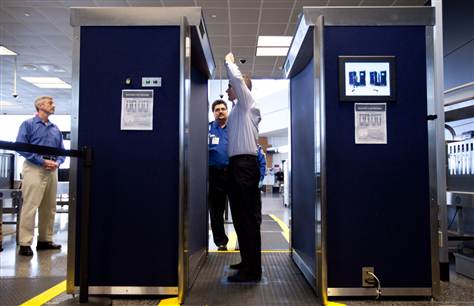 For more explanation of this month’s theme, “millennials in thirty things,” check out this post.

Robert Zandstra has written about about defining the millennial generation before in his post “Gener(aliz)ations.”

Have you ever been strip searched at an airport? No? Well, chances are that if you’ve flown in the past five years, you have been. Okay, you probably haven’t been physically strip searched, but every person who goes through a full-body scanner at an airport has his or her clothes virtually taken off and body examined by means of radiation technology.

The full-body airport scanner is, for me, perhaps the defining object of the millennial generation because it encompasses what I believe are four key factors in millennial identity: 9/11, mobility, toxicity, and surveillance.

2001 roughly marks the entrance to adulthood of the earliest millennials and births of the latest millennials. Few global-historical events have had the same impact for the generation. Heightened airport security was just one of the responses. Full-body scanners were introduced in 2007.

I flew for the first time from Chicago to Boston during the summer of 2002 when I was seventeen years old. I have no memory of airports on anything but high security.

Millennials are mobile, the post-Cold War generation, the NAFTA generation. Our communications devices are increasingly mobile. We are largely boomers rather than stickers. We go places. We fly. We go through airport scanners.

Until 2012, the standard full-body scanner used backscatter X-ray radiation technology. This type of radiation is carcinogenic. Because of that, millimeter wave scanners are now used in most airports, and they are not known to cause cancer. Nevertheless, artificial radiation still isn’t good for the body, including if it’s passing through the body to and from a cell phone in your pocket, even if it doesn’t directly cause illness.

We put toxins into our bodies on a daily basis: GMOs, pesticides, high-fructose corn syrup, chemical preservatives—all pervasive in our food; BPA that leeches into food from plastic; the chemicals and heavy metals in vaccinations, tech devices, and toiletries; and so on.

Then there is the ongoing and mathematically stupefying toxification of the earth’s soil, water, air. We’re poisoning our source of life as well as ourselves.

Climate change is another toxicity-related phenomenon that defines the millennial generation. Debt can also be metaphorically toxic. The post-2007 economic recession, fueled by toxic debt, was also a defining event for millennials entering adulthood. But student loan debt is the millennial debt issue par excellence, and it is substantially more “toxic” to the debtor than the lending institution. It can’t be discharged through bankruptcy.

At airports, I always “opt out” for a pat-down instead of going through the scanner. Pat-downs, I think, are not only less obtrusive to my privacy but are more effective at detecting trouble. I’d rather feel human hands than the invisible touch of radiation. I initially resisted using the scanners because they were carcinogenic and because I think they are a poor use of money, but now I do it more as a reminder to myself (and others) of what’s really going on. I don’t want to fool myself into thinking that I’m not being surveilled.

Any time you click a link, that information is stored somewhere in a server. Whenever you use a cell phone or the internet, you are being surveilled by telecommunications “service providers” like Comcast and Verizon; by Amazon, Apple, Facebook, and Google; and even, indirectly, by the U.S. government.

Although Google could read our emails and Apple could listen to our phone calls if they wanted to, they probably don’t. All these corporations are more interested in other things they can tell from our phone and internet use: exactly where we are and when; what we look at; who we talk to, when, and for how long; the media we consume; what we like and don’t like; what we buy. This is the information about us that is being gathered and stored, and its aggregation only magnifies the power those institutions already have.

The millennial generation doesn’t just ideologically accept this surveillance; it revels in exhibition. It wants to be surveilled. Like toxicity, some resist surveillance, but most ignore it. We just click “Accept.”

Millennials are the surveillance generation. Facebook’s Mark Zuckerberg was born in 1984; whistleblowers Edward Snowden and Chelsea (formerly known as Bradley) Manning in 1983 and 1987 respectively.

I’m not here to condemn the internet or millennials. Like the shared meals and life-sustaining foods that also carry toxins into our bodies, the internet has a lot of good to offer. But like other Post Calvin bloggers writing about tech and millennials, I feel a lot of ambivalence.

Furthermore, it’s hard to think object-ively about Big Data (or climate change for that matter). They aren’t things but simply patterns and risks that we know about through massive amounts of accumulated data points and analysis. Yet their effects are as tangible as droughts in California, the Midwest, or the Amazon, or an eerily relevant sidebar ad from Amazon.com.

Millennials aren’t just the generation born approximately post-1984; they are the post-Nineteen Eighty-Four generation. Surveillance is now vastly more sophisticated than the telescreens that Orwell imagined. Today’s devices generate far more information about their users and are no less adept at broadcasting propaganda that encourages behaviors which support the powerful and their myriad injustices.

Thanks to corporations like Apple and Facebook, we don’t mind being surveilled. Our surveillance devices are status symbols. Big Brother is cool. We love Big Brother.

wikiHow To Do Anything