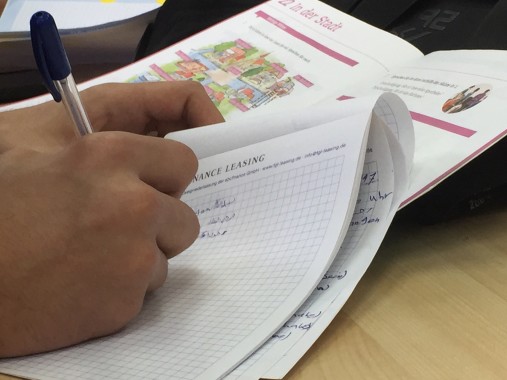 Over the past few weeks I’ve visited a couple of German classes for refugees in Cologne and have been struck by two things. First, the breadth and magnitude of the integration challenge. In less than two weeks I’ve met refugees from all over the North Africa and the Middle East, of varying religions, languages and levels of education. Some are doctors. Some have never seen the Latin alphabet. Many are young and male, but more women and children are on their way.

Much of German public discourse has hovered around the best means of integration. As Germany’s President of the Confederation of German Employers’ Associations has said, and a number of teachers I’ve spoken to have confirmed, the German language is essential achieving any degree of integration, making these classrooms critical to the success of Germany’s integration project. Dr. Ulrich Ammon, a sociolinguist at the University of Duisburg-Essen designates the Common European Framework of Reference for Languages’ (EFR) A2 level—or “Way stage or elementary”—as a measure of necessary minimum language competency. Understaffed and overwhelmed, some German teachers will testify to A2 as a goal that seems as removed from the present reality as the distance from Damascus to Berlin.

The second thing that struck me was the courage on display in the classrooms. The teachers, many of them volunteers, represent to a vast majority of the refugees their first sustained encounter with the language. Together they have little in common beyond that they are human beings occupying the same fleck of earth. The refugees often have nothing but that which they carry with them, tattered ocean-drenched passports, pocket change, their children. They live in gyms1 with 200 of their peers. They are all far from home. Every street sign and government missive is written in a language they are learning, in letters they might not recognize.

I think about the coddled environs of my own German language learning, which included stints on government grants, classes in university lecture halls and meetings in corporate boardrooms. And still the language makes itself foreign to me every day, like this morning on the train to work when a woman sitting across from me said into her phone, “I’m going to kill him” and for thirty seconds I took it literally. Or the countless times in Cologne I’ve said something I (think I) learned in Austria and have been told (correctly!) “We don’t say that here.” These minuscule episodes keep me from feeling at home in the language and remind me that I may never be able do so. How much further from home is the 40-year old tailor from Afghanistan who lacks the native words to ask for his family’s daily bread? 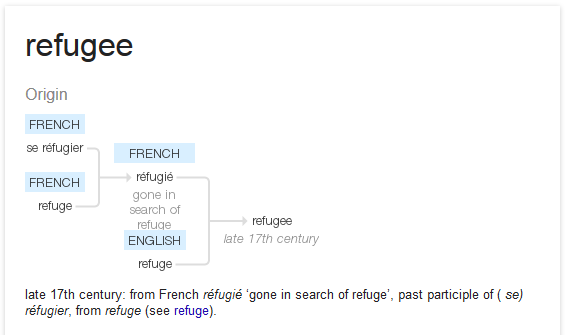 The word refugee derives from French and found its earliest English usage in the seventeenth century surrounding the 1685 revocation of the Edict of Nantes. The first Oxford English Dictionary listing of the world refugee is found in 1671: “A Protestant who has fled France to seek refuge elsewhere.” Reversal of the edict sent Huguenots scattering across Europe, including Friesland, where some Huguenots married the would-be Dutch and proliferated a genetic strain that lives on in in diminishing, infinitesimal fractions of my blood.

In Germany, A Language Test Not Just For Refugees