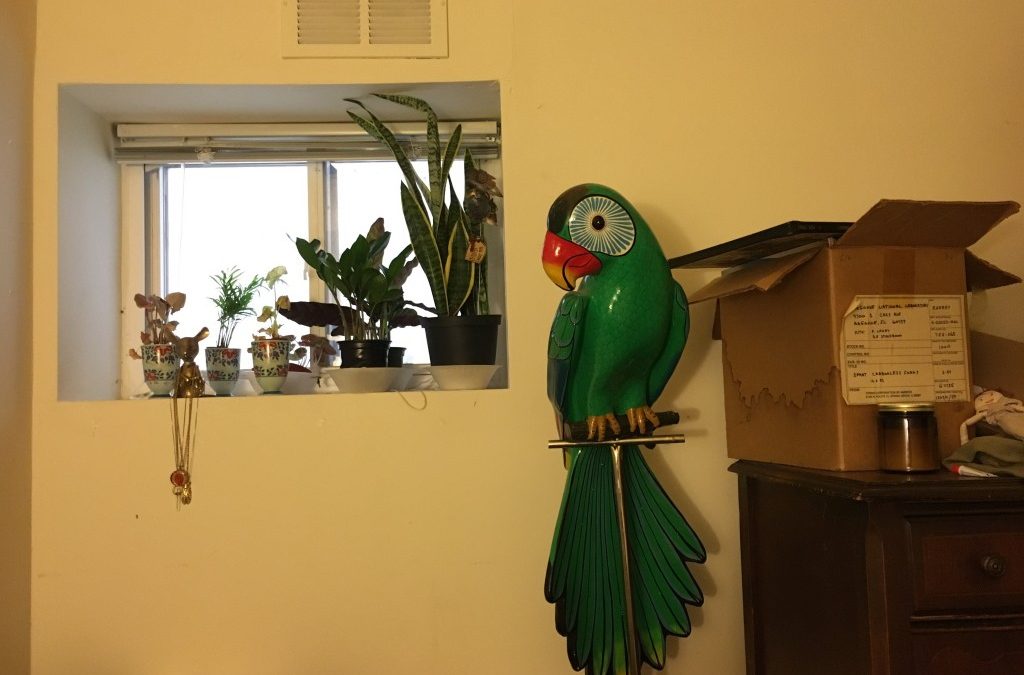 Our theme for the month of October was selected by readers and is a format challenge: write a post completely in dialogue.

You’re a parrot, and an inanimate artistic rendering of a parrot at that, but that doesn’t mean you can’t keep up your end of a conversation, right?

As long as we avoid topics including but not limited to crackers, Polly, seafaring pirates, etc., yes. And don’t expect me to regurgitate what you say right back to you.

Got it. You want to distance yourself from parrot stereotypes, from ‘parroting.’

Thanks for parroting what I just said.

I think we call that active listening.

I’ll allow that to a point, but if you are the sort of conversationalist who only ever restates (less eloquently, I might add) what I’ve just said I’ll be inclined to clam up so as to preempt any laborious small talk and insincere mutual affirmation.

I do that but I don’t like that I do.

I think most people would express a similar sentiment and yet the world keeps revolving around discussions of weather.

I have conversations in my head all the time, all my life. Sometimes I think I prefer them to real ones. After I’ve brushed my teeth or as I fix my hair I pause at the sight of myself in the mirror and I just start talking. But I pretend that I’m talking to someone specific, whomever I think will listen to me at the time. It’s as if I’m rehearsing lines for a play but I never actually say them to anyone. I guess that’s what I’m doing right now.

I think a lot of people do that, in the movies at least.

When I was little I used to narrate my life in the third person, as if it were a movie or a story on a page. I’d say to myself, “India went into her mother’s closet and put down the shoes. Then she carefully closed the closet door.” I remember it was before I could read or write because I’d try to write it all down but it when I looked back it was all chicken scratch. All that material, lost.

That’s precious, but I don’t think the world is a worse place for the lack of that content.

No, of course not, but it makes me wish I could read an old transcript of my thoughts.

I’m sure that technological advancement isn’t far off.

But what causes a shift like that: from speaking about yourself in a very detached, analytic manner to having to imagine you’re having a conversation with someone else if you want to order your thoughts in any way?

We speak to get outside of our own heads. I don’t think it particularly matters if you don’t always have an audience. You engage more with other thinkers and speakers as an adult than as a child so I would attribute the shift to that. Speaking isn’t purely reactive.

But if a tree falls in the forest and there’s no one around to hear it does it still make a sound??

A lot happens even if it doesn’t make a sound. Cracking, crashing, crushing, settling.

That’s true. I hadn’t thought about it that way.

. . . But in the end I’m still fabricating both ends of this conversation, right?

You are. But sometimes we are our own best conversation partners.

Contributor bio: After a fulfilling career as a day-brightener in a basement office of Hiemenga Hall, this parrot was free for the taking by the fireplace lobby for a few fateful minutes in spring of 2016. India claimed it and they’ve rarely parted since.

India Daniels graduated in 2017 with majors in history and English literature. Her first year out of Calvin, she moved home to Chicago to serve as an AmeriCorps VISTA at Turning the Page, a nonprofit promoting parent engagement and literacy in North Lawndale schools. She now assists Turning the Page’s used bookstores and coordinates a citizen-reporter program for City Bureau, a civic journalism lab on the South Side.

Smell It While It’s Hot

by Will Montei, October 14, 2018
In Which My Sister and I Try to Talk About Things Other Than “Lost”

by Caitlin Gent, October 4, 2018
I’m Tired of Hearing Men Talk about The Last Jedi, So I Asked a Lady Robot