An Inheritance of Names, Power, and Fabric

For many immigrants’ children like me, family history is an impassable knot. I felt stuck for so long, unsure how to enter the memories of survival, culture, and pain, until I committed to learning more about the soft pile of Ghanaian wax print fabric my mother carefully guarded in her closet. I was surprised that in doing so, I unraveled new understandings of power and what it looks like to name a bolder future for our world.

The history of colorful wax print is inseparable from British and Dutch colonial violence in Asia and Africa. As both empires searched for new ways to profit off their stolen lands, they mechanized production of Indonesian batik cloth. In the 1880s they set sail to deliver their copied goods to West Africa including the “Gold Coast,” now modern-day Ghana, which, between the Netherlands and England, was exploited by colonization for hundreds of years.

Not too long after, my great-grandmother became one of the first in her family to move to the big city. As wax print flooded the country, she became a fabric trader, buying bales of wax print to sell to market women.

What happened next surprised many. European manufacturers had only labeled the wax prints with reference numbers. But the often dismissed “market women” at the bottom of the economic power chain—traders, distributors and saleswomen—began naming the fabrics to fit into their communities that highly valued visual communication and passed down meanings across generations.

They christened a print marked with stools in boxes (below photo, left)

“If you’re going to talk trash about me, you better grab a stool to talk,”the perfect fabric for communicating that it was time to resolve a grudge.

They labeled a print with birds after the proverb (below photo, right)

“Money has wings,” a cautionary note that anyone’s fortune could turn. 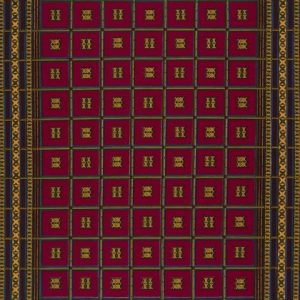 As they infused wax print’s colors and patterns with local meaning, they made it, like indigenous fabrics, an integral element of special occasions and commentaries on life, from weddings and funerals to the construction of a new bridge. They redefined the narrative of a colonial product, and European companies found themselves taking direction from their forced consumers. One Ghanaian group protesting England’s theft of a royal Asante sword for a British museum successfully petitioned a British company to produce and send them a wax print fabric depicting the sword (below photo, left) .

My grandfather started working at an imports management institution that received wax print in a new era, where, on paper, Ghana could now control what entered the country. But post-independence, Ghanaians still struggled for power and to define what true independence looked like—and that was reflected in wax print. Women sarcastically reflected on the reality of self-governance when they named a print with bursts of zig zags “Nkrumah pencil,” a reference to the first president’s tendency to sign detention orders to silence his enemies (below photo, right)

My great-grandmother carefully preserved and passed wax print and with it her stories and perspectives to my mother, born three years after Ghana’s independence. Maybe it was partly this early introduction to the world of prints that led my mother to become a seamstress and develop relationships with saleswomen in Accra’s largest market. Again, fabric intersected with power in her life as she sold clothing on the street after these women’s businesses were destroyed by military violence during a coup. That regime fell, but the women remained, making Ghana one of the few countries where women are more likely to be entrepreneurs than men.

I grew up seeing my mother in her house wax print dress, but I never heard its deeper meaning. On the rare occasion that I wore Ghanaian clothing, it felt more like a costume, a static relic of the past. In the same way, my classes discussed colonialism abstractly, cleansing all of its violence.

But now, in the morning as I dress, I am enthralled by all the stories I carry on me and within me. And while I don’t sew or remember all the fabric names, I interpret this generational inheritance as a call to flip who runs things, to challenge who names where power and beauty reside and the systems we support as a result.

As with most things in life, the questions and knots over power in wax print continue—over its Africanness and ownership, over cheap production, status, and access. But if there’s anything that my people are brilliant at, it is reimagining new ways to relate to power and history and new ways of telling each other who we are.

And so, with amused irony, I think back to a day before I knew any of this—the day I graduated from a university founded in the Dutch Reformed tradition. I received my diploma wearing a dress made from the Nkrumah pencil wax print, a nod to a not-yet-fulfilled movement for liberation.

It seems I am cut from the cloth of women who make a way out of no way.

Comfort Sampong’s heart is sparked by fried plantains, tropical foliage and the stories of women thriving and creating a way out of no way. She graduated in 2018 with majors in economics and international development. Now she lives in Tegucigalpa, Honduras, where she works on English communications for the Association for a More Just Society, a Honduran non-profit fighting for justice and peace.