The Humble Retellings of a Child Archaeologist 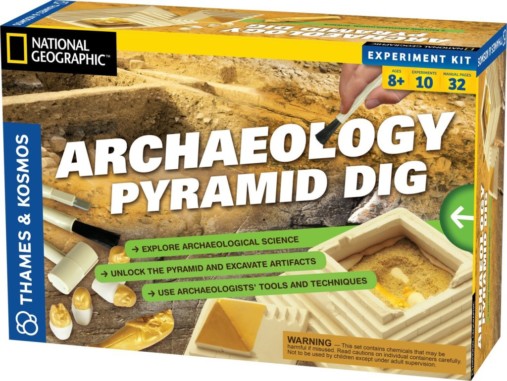 I vividly remember the season of Advent as a kid. The weighty glory of God enfleshing himself to be born as human child to a poor family thousands of years previously was, unfortunately, lost on me.

I wrestled with weeks of eager anticipation, I pondered the light and darkness of the world, and I poured over the written word…of Discovery Kids seasonal gift magazine. My parents were all about the educational toys at Christmas, so instead of Barbies, Polly Pocket, or PowerPuff Girls paraphernalia, come Advent I was writing letters to St. Nick about top historical nonfiction books and the like. The toy most worthy of keep-me-up-at night-excitement was the authentic kids archeology dig kit. For a mere $29.99 I could uncover the secrets of history. I, a normal Midwest kid, could travel back in time to the dinosaurs, or the Aztecs, or even Atlantis and plumb the depths of scientific and cultural mysteries that had, hitherto, been unknown to the modern age.

Each kit came with a 6×8 inch block of hardened sand, a shovel proportionate for an infant mouse, and safety goggles as sturdy as Saran wrap. The back of the kit included backstory with grandiose details about the history of my chunk of ancient history and was accompanied by pictures of specific treasures I might be fortunate enough to uncover.

Once the dig began, I was transported back to an age of mystery and danger. As sand flew (in my eyes because the goggles were completely worthless), I wondered about who had seen these treasures last, before they were buried by time. Was it a beautiful and daring princess who sought to protect these family heirlooms from an evil uncle intent on stealing her ailing father’s throne? Most likely. Otherwise it was a village child with untapped silversmith skills that he had to keep secret because then he would be forced to work in the city and leave his poor bedridden mother to tend for the remaining fourteen siblings whom he had taken under his care and provided for these past years. The stories grew in detail as the shoveled sand piled around me.

Was I ever disappointed by the miniscule silver-coated figurines I uncovered that lacked detail, craftsmanship, or time-period connection? Absolutely not. The lack of any clear, identifying features only heightened my conviction that these were bona fide historical artifacts. I knew that ancient tools were not given to precision that our modern devices had. Of course an ancient Egyptian Sun God statue the size of my pinky toe would be bulbous and want for determining details of a face. That’s what made it authentic.

At the end of my hurried fifteen-minute excavation I would wipe my haggard brow, wash my hands of sediment, and gaze in wonderment at the mysteries of history that I, a mere, but exceptionally talented and wise, child had unearthed.

Only in later years would I reflect on the disproportionate gap between the amount of time I spent anticipating these treasures (the entirety of the Advent season) and the amount of time it took to actually unlock them from the dirt (fifteen minutes flat with prep and cleanup time). I was astonished. I was an archaeologist for a full FIFTEEN minutes. That was like, half a Lizzie McGuire episode. Wow. I really was blessed.

Rebekah (’12) teaches English as a second language at Grand Rapids Community College. She does not drink coffee nor purchase Apple products.

This Is A Lie

by Alissa Anderson, December 5, 2013
Christmas During the Time Being