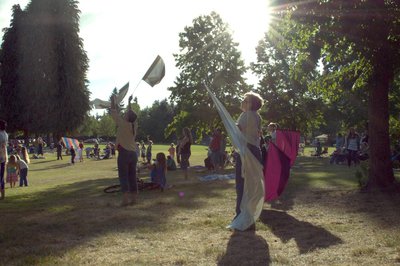 Recently, my wife and I were strolling through a park that runs along the Willamette River, one of our favorite walks where we live in Eugene, Oregon.  We were thinking of turning back home, but we saw tents and heard music ahead of us and decided to investigate.  As we approached, we speculated that it might be the Eugene Hemp Fest, which we’d heard would be taking place soon.  Then we heard the words being sung.  It was a contemporary praise song.  Signs along the path approaching the event read “Supernatural Healing Ahead” and “Expect Miracles.”

We stayed at the margins as we observed a substantial crowd listen to a speaker on an open stage and browse booths from local churches, including the Cowboy Church of Oregon.  The leader spoke in an intimate-yet-impersonal, mega-church style of God’s healing power, initiated an altar call, told stories of miraculous healing, and later called people up for healing. The prayers began as the wheelchairs rolled up, but we didn’t see anyone get out of them.  It was nearing dusk.  We returned home before the event ended.  I learned later that the event was only a part of the weeklong Supernatural Fest in Eugene, and that many were healed over the course of this event.

Before we left, a middle-aged man standing near us on the margins asked very non-intrusively if we had any questions.  I noticed he had a nametag and said, “Thanks, no,” even though I immediately realized that I did indeed have lots of questions, not just about the event but about the relationship between faith and healing.  For example, what do we expect when we make so many health-related prayer requests?

What the stereotypical faith healing beneficiary suffers from seems similar to Conversion Disorder as listed by the Diagnostic and Statistical Manual of Mental Disorders (DSM) used by professional counselors and psychiatrists.  Conversion Disorder is characterized by disabling “symptoms or deficits affecting voluntary motor or sensory function” (like blindness or inability to walk as opposed to kidney failure), isn’t faked, and cannot be fully explained by another medical condition or any physical, cultural, or other cause. Freudians would say that it is caused by trauma or other stressors that are repressed and “converted” into physical symptoms.  (This is basically what happens to Tommy in The Who’s Tommy.)  Some believe that faith healing happens when a person’s experience of faith—a spiritual “conversion”—heals the underlying emotional damage, causing the symptoms (of Conversion Disorder) to disappear.

Does this explanation leave room for God or does it explain God away?  I think the former.  But I doubt the faith healing preacher would agree.  One of the things he most strongly emphasized was the separation of human healing and God’s healing work: while we should be grateful for “medical science,” God uses supernatural means to heal us.  It makes sense to me that what we know and experience through perception, reason, and faith are different aspects of life (sphere sovereignty and so forth), but also that God works in each of these aspects.  I’m wary of a separation between God’s sphere and anything else.  The Freudian God-debunkers make the same separation.

The faith healer also commissioned those who had been healed, those with faith, to go out and heal others.  “You have the power of God in your hands,” he kept repeating.  If he meant that we should practice empathetic listening and care about the emotional and spiritual needs of others, great.  But what he was saying seemed like the premise of a Flannery O’Connor story about to go violently wrong.  I remember a professor at Calvin telling our class that faith healing and other particularly “charismatic” spiritual gifts should only be practiced in monasteries.  There they could be prevented from being abused and safely channeled toward the benefit of the church.

Perhaps what I question most is the emphasis that both “medical science” and faith healing place on the disappearance of symptoms in individuals rather than communities.  The extensive healing ministry of Jesus, the “wounded surgeon” or “wounded healer,” always involved bringing the outcast and “unclean” back into belonging in a community whose Pharisaical system of health had excluded them,

I wonder, how would Jesus want us to respond to the powerful mess that is the United States’ very euphemistically named “health care” system, when that system, more accurately the medical-pharmaceutical-insurance industrial complex, produces and perpetuates injustice in at least as many ways as it seeks to help people?

The week after the faith healing, my wife and I briefly checked out the Hemp Fest.  It was in exactly the same spot.  Both had food, booths, speakers, and annoying music.  People were ignoring the “No Illegal Activities Please” sign at the Hemp Fest entrance as blatantly as I’d ignored the “Expect Miracles” sign.  Besides the overpriced hippy/Rasta/pothead paraphernalia, the main emphasis of Hemp Fest was the legalization of marijuana.  In particular, booth after booth had information on the medically beneficial properties of cannabis. To deal with the difficult realities of life, drugs—pharmaceutical, homegrown, or otherwise—help numb pain or shut out the world.  At both festivals, the need for healing in a pain-filled world was on full display.

I don’t believe that faith and religion are simply an opiate on the scale of “the masses.” I believe they offer a path to ultimate healing, physical and spiritual and complete. What role faith healing plays in that remains a question to me.  I have no doubt that God can and does heal individuals’ physical infirmities, and I myself have found being anointed with oil in Eucharistic healing services very meaningful. Even though the concrete, here-and-now means to that final end when “all manner of things shall be well” remains a mystery, I continue to look to the message of the gospel in the Eucharistic liturgy and the communal “altar call” for nourishment from Christ’s body and blood as a reliable path toward healing.

(Side note: such festivals are common in Eugene, which by some accounts is the hippiest city in the U.S.)

by Ben DeVries, September 18, 2017
In Sickness and In Health