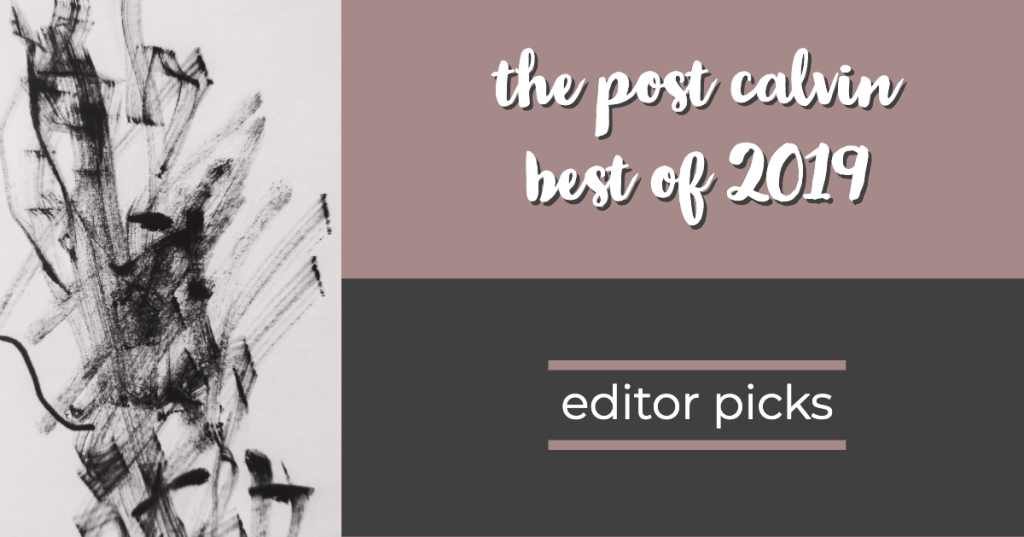 This year, we’ll hear from our readers, our writers, and our editors for these last three days of the month. Today, each member of the editorial board has chosen some of their favorites of the year.

A is for After | Katerina Parsons
This could be just a gimmick, but instead, its urgency and linguistic dazzle convey a complex brew of feeling. When it reached Z and turned back around toward A? Swoon.

Naïve Observations and Questionable Qualifications | Josh Parks
In one semester, Josh figured out what it took me decades to learn: teaching is a daily exercise in failure. So cool when a former student, now standing where you’ve stood, gets it.

In Uncertainty I Am Certain | Josh deLacy
This one offers insight into how young people are negotiating faith in a time of crisis and upheaval in the church. Personal, while illuminating of a broader cultural context.

A Hysterical Essay about Packing | Abby Zwart
I love it when Abby gets riled. Also, as a fellow sufferer of packing hysteria, it’s nice not to feel so alone.

tsunamis along the coast | Will Montei
A gorgeous style experiment. This must be what it feels like inside Will’s mind: stormy and exhilarating.

An Open Letter to Owls | Gabe Gunnink
A delicious mix of clever, annoyed, and gracious at once.

Putting My Underwear on Backwards | Katie Van Zanen
“Potential” is a mixed blessing. This essay is honest about that.

One of my favorite things about the post calvin (and yes, I’ve written that phrase many times in the course of six years) is the way that pieces speak to each other. Sometimes it’s directly—writers will respond to other writers’ posts, or we’ll host a theme month and the posts become a salad bowl full of different colors, flavors, and interpretations. But as someone who reads every post, I start to notice other not-so-obvious connections. As a little celebration of that, I’ve paired or grouped some of my favorites of the year. (Shoutout to film critic Justin Chang of the LA Times and Fresh Air for the format idea.)

These two pieces include odes to delicious food and drinks (pizza and cocktails, respectively) but also skillfully connect that food to ruminations about memory and tradition. Then they end in my favorite way—a little sadly, a bit unresolved. And yet! I follow Andrew and Caroline on Instagram, and I’m happy to report that Pizzeria Innamorato opened back up and the Higgins family continues to gather often for drinks, beautiful cheese boards, and twinkly-light nights around a campfire.

Okay, so Alex’s post about food technically fits in the category above, too, but I’ll put him here, with the other writers who joined the post just this year. I love our summer season of transition, when we retire some voices and gain a whole new crop of fresh Calvin grads ready to share their post-diploma life. Alex’s restaurant industry education made all of my Sweetbitter fantasies come true (great book, though I can’t recommend the show too highly), Annaka dropped me into a fantasy world when she sent in one of the best audition posts I’ve ever read, and Jon’s accounts consistently keep me thinking about the non-fantasy natural world.

Six years in, I’m always excited that our writers can still come up with unique and creative pieces. Our Alphabet Soup theme this September was the editorial board’s favorite theme ever, in large part because of all the interesting things writers did with form. Alex’s letter E installment is a beautiful and quirky use of the online format that I’d suggest reading on a laptop or desktop unless you’re really skilled at highlighting things on your phone. And, I would gladly read an entire book of Jeff’s modern fables, which are the funniest thing I read on the blog all year. Please, do yourself a favor and try them out loud.

It doesn’t fit any of the categories, but I can’t neglect Cotter’s piece about Jeopardy, which checks every box of what makes a great post calvin piece in my mind: a creative title, a specific story or text, some personal reflection on that thing, and a killer last line or two.

My Brother In Bushwick | Caroline (Higgins) Nyczak
Caroline has an eye for details that brings people I’ve never met to life. This slice-of-life portrait of her brother captures so many things at once—a person, a relationship, a city—all with simple, striking observations.

Jes | Ben DeVries
Jes appears often in Ben’s writing, but usually not as the sole subject. His struggle to define her here, and the way he draws her in by describing their conversations about the essay itself, indirectly show the effort, mystery, and tenderness of a marriage.

Listen | Kyric Koning
Kyric consistently brings new perspectives to the post calvin (he and Ben DeVries both reveal video games’ literary significance for instance), and I appreciate this piece even more for its vulnerability. He goes right at it with lines like “My phone serves as a glorified alarm clock” and “avoiding people because it’s easy or I’m afraid.” It’s not something I read about much—admitting loneliness can feel like admitting failure—and when I do find writing that addresses it, it’s usually couched in the context of depression. Kyric’s honesty here makes me uncomfortable and thoughtful in a way good writing should.

Slices of Asphalt | Caroline (Higgins) Nyczak
I can’t get enough of Caroline’s poetry. This one “makes the best of it” in a mindfulness-y way—sort of discovering the best by paying attention and letting go of the hoped-for beach day because, really, it was never about the beach anyway. I feel as if I’m in the parking lot with her, and the refrain of “It’s not a terrible way to live” lingers long after I stop reading.

Ship’s Log | Ansley Kelly
This is a great adventure piece—an underrepresented genre on the post calvin (especially since’s Nick Meekhof’s retirement). Ansley’s love for sailing carried through every section, and she managed to convey sailing-specific particulars in ways that felt familiar. I loved reading her talk about this feeling, for instance: “I threw up at sailing last night—three times! It was horrible and awesome at the same time.” But what really sold me on this piece was how she shows the camaraderie among her and her crew.

Prepare for Re-entry | Katerina Parsons
In yet another beautifully written piece, Kate shares the experience of returning to the US and years in Honduras so intimately that I felt like it was my own, even though I’ve never experienced anything quite like this. She keeps this piece trim with perfect section breaks—there’s nothing to skim, because everything matters. Lines like “‘I’d love to meet them!’ I chirped,” show everything the reader needs, with nothing wasted.

Burrito Dreams | Cotter Koopman
Good writing can make any topic interesting, and Cotter makes burrito-making pretty damn enthralling. He shares a friendly, personal take that draws me in, so when he raises big questions halfway through, I’m invested—these questions now matter to me, too. He touches on social justice, corporate culture, non-academic education, and other issues, and he doesn’t offer answers. Cotter leaves me with plenty to think about, having showed me the complexities of one job “we’ve deemed transitional at best, despicable at worst.”

The VeggieTales Effect | Ben DeVries
This was my favorite piece from our “Dear the post calvin” theme month, as well as one of my favorites from the whole year. Ben takes on the question of “Should (and how can) I be more open-minded about media?” with the attitude I want from every professor—he treats the question with the utmost seriousness and brings all sorts of complicated ideas into the fray, but he presents them in a relatable way that makes the reader feel respected and valued. It brings me up to his level. Ben’s involved answer frequently risks losing itself (or at least exhausting the reader) down rabbit trails of auxiliary questions or religious/pedagogical opinions, but Ben knows what he’s doing. He introduces hot-button topics with lines like “it’s a feature, not a bug” and “speculative fiction might do a better job of depicting climate change” just enough to keep the reader on edge and inspire discussion later, and then Ben uses them to raise successively bigger questions. He never loses track of where he’s headed, and when we get there, I believe his answer completely. I ruminated on this piece for quite a while after I first read it (though not nearly as eloquently as Ben), and I’ve found myself asking “What would someone who isn’t me appreciate about this story?” in all sorts of situations.